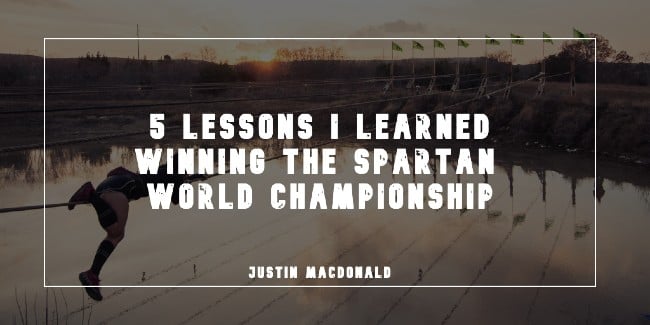 I learned some stuff along the way that had nothing to do with running and lots to do with being a competitor, a leader, and a human. Writing this blog post feels a little weird, braggy and personal, but I’m making myself get over it because I’m still learning and growing, and that’s worth sharing because we’re all on a similar journey to be our best version of us (and because Greg insisted I share this).

This post is about me, but it’s for you.

So if that doesn’t serve you, then permission granted to just pass this one by.

Three years ago, I ruptured a disc in my lower back. I could barely walk, and I spent half a year sleeping on the floor in constant pain.

I was 37, and life as I knew it was over. It was depressing. And I learned lots of athletes go into deep depression and even alcohol and drug addiction to escape chronic pain .

It was serious. And it was scary because my identity started to get stripped from me. Athlete, coach, fun dad. I couldn’t run, I couldn’t throw, I couldn’t play with my kids.

And if you’ve ever experienced chronic pain or still do, I’m so sorry, and I know how hard that is. It’s a long road back, but it can be done.

I’d accomplished the 30 year mark, and 40 was approaching. So I decided to work back and give myself a shot. I wasn’t cool with it being “over” at 37.

So I chose no pain killers, no surgery, just PT, diet, and patience.

With my body back, I set a goal to run the Spartan Trifecta by my 40th birthday.

The Spartan race is an endurance obstacle race, and the Trifecta is running all three of the race distances in the same year. My first race was this February.

Then the COVID pandemic hit.

The world shut down, and I had to run my other races virtually.

But in the process, I accidentally qualified for the World Championships to be held in Sparta, Greece last weekend.

They had to run the race virtually, but now I really had no excuse. No air fare, no risk of travel.

But I would be racing in the Elite class with pros and serious racers. I don’t consider myself either.

What I accomplished over 8 months, I was now attempting to do in 48 hours, against professionals.

So that brings us to race weekend. And if you’re still reading, you want to know what those 5 things I learned are during that race.

1. If you decide you’re going to do something, you can do it.

I wanted to be in better shape by 40, but it wasn’t until I decided, and then verbally declared it to others, that I had to change my behavior and make different choices to accomplish that thing.

I think the important lesson is also this: you can only decide to do something you can control.

I didn’t decide to win. I just decided to race.

So when you want something, stop wanting it and simply decide you’re going to achieve it, then do the things you must to achieve it.

This will separate you from 95% of everyone else on the planet.

2. Play to your unique superpowers.

You are the best at something. Find that thing, and ride it.

Don’t worry about the things you’re not great at. Just be acceptable at everything you need to be and really lean on that thing you’re truly great at.

For me, I found out a few things about myself as an athlete.

I was always a pretty good athlete. Better than average for sure.

But I’ve never been the best in the world at anything.

I’m not the fastest dude on the planet, or the strongest, nor the best long distance runner.

But, blend those three things, and I found out this combination of athleticism is perfectly suited to my strengths.

I’m stronger than the distance runners. I’m faster than the cross-fit dudes. And I’ve got better endurance than sprinters.

So often that inch or that second is a choice we can simply take and pay for with just a little suffering. The suffering is short-lived, but the victory is permanent in history.

So as you go about the game you play in life, small business, or whatever, find your sweet spots and work inside that as much as possible.

Just lean into it and ride it.

3. You’re only competing against yourself.

You already know this. But so often we get focused on others and what they are doing or what they are great at. Instead of just running our race, playing our game, being our best.

You are only as good as you are capable of being. No better.

So the best we can do in the moment is maximize our current capability. Don’t fight it, don’t wish it were better, just be as good as you can be at that moment.

If you want that capability to be greater, you have to go earn that with training. Investing in coaching. Actively working to upskill.

But in the moment, you are exactly who you are and capable of what you are capable of. Embrace that. Enjoy that. And achieve as much as you can in that moment.

When I was running I was thinking about the Eluid Kipchoge, the Kenyan who broke the 2 hour marathon this year. It’s insane what he did. Check it out when you can.

Then guess what happened. I was gassed. My sprint race was my worst. I didn’t place first in that race. Because I was trying to be something I wasn’t. I was thinking about other people and wishing I could do something I wasn’t capable.

In the next two races, I simply ran. I didn’t think about anyone else. I just ran as well as I could. When I felt my pace slowing, I just pushed 1% more. Arm swing, knee drive, forward lean.

And I did something crazy, I stopped thinking about winning.

I just thought about running.

Winning was just a result.

Winning would be the result of whoever combined their preparation, athletic talent, and good running that day.

Which meant, I could only control one thing while in that race: how well I ran.

4. You are made to do hard things.

Today we have to exchange real beasts for the beasts of our making. But it is for this that we are made.

I think we need to tap into this to live meaningful lives. There’s a reason humans are 28% less happy in the last 20 years, even though the world has never been wealthier, easier, or safer in human history.

But make no mistake, you’re made to slay dragons.

I really mean this.

Think about the pinnacle of your life so far. Think of the sacrifices you made to get there.

Now think about if it really matters. If anyone else cares, or even knows about it.

Think about the thing you care so much about, the things you’ve been obsessed with in life. Let’s say it’s winning a state championship (remember, I’m a football coach).

I’ve been obsessed with winning a state and national championship.

And I have, on multiple occasions. Felt awesome.

I suspect that’s true too for the awards and accolades in your field, industry, or region.

If we pursue excellence only for the satisfaction of others’ approval and adoration, we will be empty.

It doesn’t mean pursuing excellence isn’t worth it. It just means the pursuit of excellence IS excellence, and if that’s enough for us, we will be content. It also means there is no arrival.

The quest is the point.

Don’t collect trophies to validate your worth.

Just slay dragons because that’s what you do.

We really have only ONE thing we can control in our lives: what we choose to do with our time.

Our lives are the sum and product of those choices. Those choices are how we buy the life we want.

I hope your choice to read this helps you buy the life you want.